Both the Kazakh and Russian languages use the Cyrillic (or Russian) alphabet.  It was created during the 9th century by two Byzantine monk brothers from Thessaloniki, Saint Cyril and Saint Methodius.  However the Cyrillic alphabet you see today has been modified numerous times over the past 1,000 years.

Whereas English may be spoken in offices where expats work as they are often European or American companies, it is not spoken by a large segment of the general population in Aktau.  The young Kazakh and Russians are more likely to speak some English since they often study it in school.  It will be beneficial to learn the Russian alphabet and some key phrases in order to be able to communicate more readily.  The local people will attempt to help you very often if they see you are trying to speak even just a few words in Russian.

Fortunately in this electronic world we now live in, there are many ways to learn Russian, such as language software, online language courses, online translators and of course language dictionaries and grammar books.  Language courses and private language tutoring are available in Aktau too.

Here are a few suggestions for software or websites to learn beginning Russian:

There are a lot of other sites and products on the market, so you can even find sites on the internet where you can watch them speak on video and hear it at the same time.

Since language learning takes time and practice it would be advisable that you begin your language study before you arrive in Aktau, however if that does not happen, you will be able to pick up useful phrases once you are in the city.  Buying a good English/Russian dictionary and getting some useful grammer and/or phrasebooks in your own country is a good idea as they are not readily available in Kazakhstan.

There are some other useful tools, for example the iPhones have a translator app which can be good for a few words or short phrase translations while shopping or doing other activities.  Carrying a printed copy of some key phrases and a list of the Russian alphabet with you in the beginning will be helpful.  The local people will even see you have a dictionary and ask to see it so they can show you the word in English so you can understand each other.

Using the internet, you can google “You Tube, Travel Linguist, Russian 101” there are a series of Russian videos where you can see and hear the Russian speaker saying common phrases used in everyday greetings, shopping and dining.  Russian is a phonetic language, so if you learn the alphabet first, it makes reading it and speaking it much easier.  Also, if you practice reading the signs, labels and other written forms, it helps you learn faster.

Although Kazakh is also spoken here, as expats it is highly unlikely that you will be expected to know Kazakh, so this is why we are advising you to study Russian first, and if you have time later on, you can learn some Kazakh.  We believe it may be confusing if both languages are studied simultaneously, however if you are a strong linguist and already know several languages, you may choose to study them at the same time.

If you write down words in Russian on a piece of paper in advance of going to the store, it can be helpful if you just show your note to the sales staff.  We have found that even if we cannot speak much Russian, if we have a good attitude and smile and we are humble, the local people will respond by being helpful.

As in any overseas assignment, it is their country, their language is dominant and it is up to the expat to help bridge the gap by being interested in communicating in the local language.  If they can see you are trying, they will be happy to help you.

You can see these phrases in many other languages by clicking on the English versions (courtesy Omniglot.com).  By clicking on the Russian words in brown, it will give you the pronunciation.

* Christmas is celebrated on 7th January by Orthodox Christians.

In and around Aktau 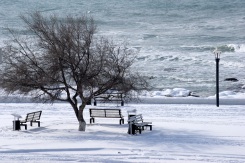 Horses in the Steppes in Summer